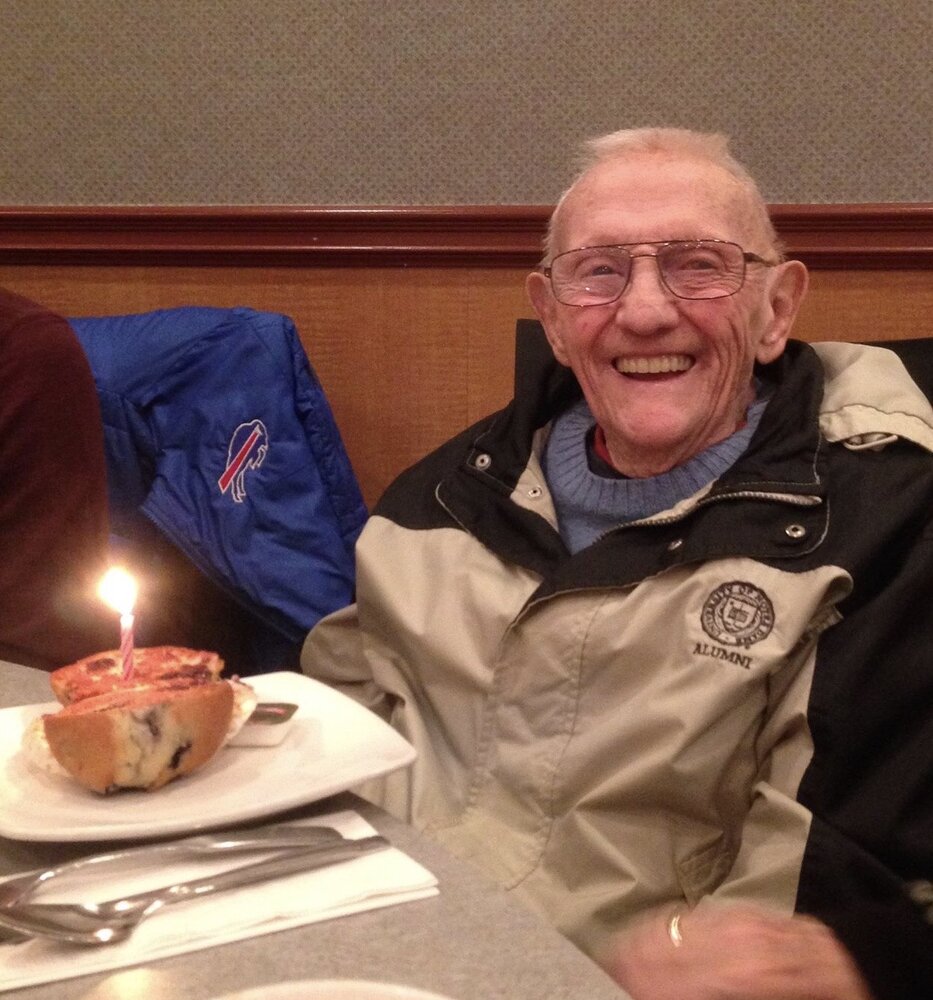 Don was born on February 1, 1930, the second child of Leonard and Irene Mongeon. He spent his childhood years along with hisbrother Len, and sister Marilyn in Rockville Center, Long Island, New York. A graduate of Bishop Loughlin High School in Brooklyn, known as D.J. in his youth, Don worked his teenage years selling hot dogs to hungry beachgoers on the shore of Point Lookout, on Long Island’s south shore. When not satisfying the appetites of his clients, Don held down 3rd base on the Concessionaires baseball team, whose success culminated with a lopsided victory over the Point Lookout Lifeguards in the summer of 1949.

Donald graduated from his beloved Notre Dame University in 1952 and continued his studies at New York University. He was wed for 66 years to the love of his life, Mary Louise Coyle of Hornell. Don traded in his apron and spatula for a pen, writing advertising and jingles for the J.C. Penny Company in New York City. Perhaps it was this experience that led him to songwriting, including the family favorite, “Back-fire.” While Don never achieved the musical success of his childhood friend, the legendary Burt Bacharach, his songs are considered classics by Mongeon family members everywhere.

After serving his country with the U.S. Army during the Korean conflict, Don returned home and began a long and fruitful career in teaching. The family relocated from Long Island to Penfield, NY in 1964, and the remainder of his teaching career was spent at Penfield High School. Along with business classes, “Mr. Mongeon” taught students in the Distributive Education curriculum, often culminating with memorable trips to the Catskill Mountains, where students competed in DECA (Distributive Education Clubs of America) events at the Concord Hotel. Long after he retired from his teaching career, while shopping or dining, Don enjoyed a seemingly endless stream of former students who would stop to say hello and thank him for the education and guidance received by their dedicated teacher.

Family was at the center of Don’s life. He and Mary Louise raised eight loving children in their Penfield home, a family that has blossomed into children, grandchildren, and great-grandchildren in several states. Don supplemented his teaching income in several ways, including working second jobs as a waiter and bartender in several of the Rochester area’s finer hotels, golf clubs, and restaurants. He also serviced many loyal customers as a door-to-door Fuller Brush salesperson, was a driver education instructor, a park ranger, and a newspaper delivery driver. Somehow, he found the time to perform in local musicals, including South Pacific, Godspell, and in McQuaid Jesuit High School parent shows. He was a wonderful entertainer and host. When visitors were anticipated at the Mongeon home, he was known to overload the barbeque with vastly more food than could possibly be consumed. In this regard, his bartending skills also proved a real asset.

All his life, Don was a man of great faith. He attended daily Mass at St. Joseph Church, and exemplified service and sacrifice. As part of the St. Joseph Food Ministry, Don volunteered on the back dock of a local grocery store with other volunteers, who loaded and delivered food to local homeless shelters.

Don loved to play golf, and his children marveled at his drives, straight as an arrow, even after his 90th birthday. He was the only Mongeon to ever score a hole-in-one on the golf course. Weekly, Sunday 7:00 a.m. Mongeon breakfasts were regularly attended by varying numbers of family, which ranged from 5 to 25 participants or more. He always appreciated the kindness of employees at these family breakfasts. They knew him as “the Cowboy,” a reference to an old black and white photo from his earliest days, in which he was dressed in full western attire in the saddle of a traveling pony, working its way down the streets of Rockville Center.

Don was a loveable man, with a relentless, silly sense of humor. He sang and did impressions and shot baskets in the driveway – his specialty was a backwards, over-the head shot. A nickname, “the Doctor,” was the result of his time spent on the pitching mound in the Penfield Recreation softball league, where he played with his sons and their friends.

For over 70 years, Don remained the truest, most loyal, most devoted, fan of the Notre Dame Fighting Irish.

We will miss you, Dad.

Share Your Memory of
Donald
Upload Your Memory View All Memories
Be the first to upload a memory!
Share A Memory