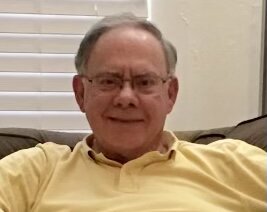 December 4, 2022, at the age of 80.
Survived by his wife, Brenda (Schneckenburger) Colby, his daughter, Kathy Colby Scott (Steve Scott), his son, Tom Colby (Shilpa Satoskar): four grandchildren, Becca Scott, Cara Scott, Anand Colby, and Ashwin Colby; his sister, Susan Colby (Bill Klement), and his brother, David Colby.
Bill grew up in the small, country town of Walled Lake, Michigan.  After  receiving both an undergraduate and a law degree from the University of Michigan, he moved to Rochester in 1966, and remained in the area for the rest of his life.  He was a partner at the law firm of Harter, Secrest, and Emery, where he practiced tax law for more than thirty years.  He chaired numerous committees of the New York State Bar Association Tax Section (serving on its Executive Committee for nearly two decades), served on many committees of the American Bar Association Tax Section, and authored multiple articles in leading tax journals.
Bill was actively involved in local charitable and educational organizations.  He served as President of the Foundation of the Monroe County Bar, Chairman of the Board of the Rochester Museum and Science Center, and on the Boards of Directors of the The Genesee Community Charter School, the SUNY Brockport Foundation, and the Sojourner House shelter for domestic violence victims.
Bill was known for his sharp intellect, encyclopedic knowledge, unwavering ethical compass, clever sense of humor, and notoriously quick wit.  He had a passion for Michigan football (holding on just long enough to see one more satisfying win over Ohio State and Big Ten championship), world travel (having conducted extensive research to plan one-of-a-kind family trips to more than 40 countries on six continents), and the study of world religions.  A man of eclectic interests, he dabbled over the years in golf (he was a long-time member of Oak Hill Country Club), collecting ancient coins, sheep farming, cultivating roses, collecting (but mostly consuming) wine, solving puzzles, landscape painting, baking bread, debunking pseudo-science, and singing in his high school barbershop quartet.  He was a genuinely kind man, and he took the greatest joy late in life in bragging about his grandchildren, both biological and honorary.
A small memorial service will be held sometime after the holidays.  In lieu of flowers, please consider a donation to the Rochester Museum and Science Center.

Updated Memorial service information:  Sunday, January 15 at the Genesee Valley Club, 421 East Avenue, Rochester.  The memorial will commence at 3 pm. and guests are welcome to mingle and share memories until 6 p.m. The GVC requests that guests enter the building via the doors closest to East Avenu.