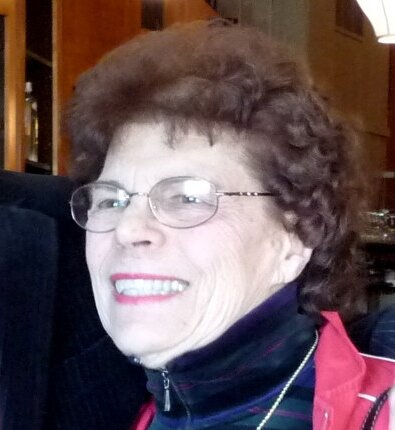 Calling hours will be held on Friday, October 14 from 4-7 pm at the Jennings, Nulton & Mattle Funeral Home, 1704 Penfield Road, Penfield. Her Funeral Service will be celebrated on Saturday, October 15 at 12:30 p.m., Creation Chapel at White Haven Memorial Park. Entombment will be private. Donations in Janet’s memory may be made to Lollypop Farm.

Janet was born to Leo and Esther Schueler June 26, 1927 and lived all her life in Penfield, NY.  The calling hours at Jennings, Nulton & Mattle Funeral Home will be almost across the road from the property she grew up on, where her parents had a small farm with chickens and pigs.  Janet was raised during the depression and remembers her parents never turning anyone away who showed up on their doorstep hungry.

Needless to say, Janet LOVED Penfield—the family has 100 years as Penfield residents and she has fond memories of fishing in the creek with her father and riding her bicycle to school every weekday.  She was 10 years old when her brother, Lee, was born and she  adored having a younger brother to help take care of.

Once Janet grew up and started working, she was introduced through friends to Roland Knapman, who was from Newfoundland, Canada.  They married and eventually had their daughter, Susan, in October 1958.  That same year, Janet, Roland, Leo and Esther built the home they would all  live in—of course, in Penfield.  Family was everything to Janet, and Sunday dinner was a wonderful time for family to gather at that home, share supper and play cards for hours afterwards.  It was a time to laugh and for my father to accuse Janet of underbidding her hand when playing Pinnochle.

Janet worked as a secretary for Allstate Insurance Company for many years, then went on to work for A.R. Pierrepont Company, Inc.   She loved the people she worked with there, and they understood her commitment to family always came first, so they worked with her when she needed some flexibility in her schedule.  Roland worked multiple jobs while attending night school at RIT until he could get a job working for Eastman Kodak as a chemist.  Once he retired, he insisted Janet retire as well so they could travel.

While they loved going to Myrtle Beach , SC regularly—often to meet up with the same group of friends every year, nothing brought them more joy than their grandchildren, Spencer and Meghan.  They were doting grandparents, teaching them about their peach and apple trees, strawberry plants and raspberry bushes.

To Janet, nothing was more important than her family, and she proved that every day of her life.  Anytime someone needed anything, they would turn to Janet who generously gave whatever was needed to solve any problem they might have.

Janet was also devoted to her church, the Penfield United Methodist Church, attending services regularly, helping with special dinners, and as she aged, joining Keenagers to be with her church friends.  As aging made meal preparation more difficult, her church friends were especially wonderful dropping by with food and taking time to visit.

We want particularly to thank Lee’s daughter, Julie Schueler, who helped Janet regularly with housecleaning, bathing, dressing, and great company—often bringing her grandchildren, Gia and Harper. We also want to thank Happier At Home and Maddy, in particular, for being both an aide and a friend to Janet.

Lastly, Janet loved animals, could never resist a stray, but particularly loved Collie dogs and Siamese cats.   The ashes of one of her belowed dogs and two of her cats will be buried with her, as she requested.

Janet lived to be 95 years old, and had a life well lived with plenty of joy and a total commitment to her faith.

Share Your Memory of
Janet
Upload Your Memory View All Memories
Be the first to upload a memory!
Share A Memory