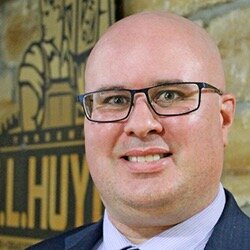 It is with profound sadness that we share the loss of Brian M. Sidney-Smith on Thursday, October 6th, 2022 at the age of 39. He was predeceased by his father, Desmond (Desi), his brother, Corey and his mother, Carolyn. He is survived by an aunt, Patricia, and his “Chosen Family”, who already miss his boisterous laugh.

Born in Rochester, NY, it’s no surprise that Brian was an avid hockey player and life-long fan of the Buffalo Sabres & Bills. He graduated from The Aquinas Institute of Rochester in 2001. Brian was a proud Alumnus of St. Bonaventure University, earning his BBA and MBA in 2005 and 2006. He played Club Hockey at Bonas, which his father and friends enjoyed visiting to watch him play. After Brian graduated from Bonas, he worked for GE in sales, a job he was tremendously proud of, and most recently with G.L. Huyett. Brian was a hard-worker, loved cars, golf and time with his friends. He played men’s hockey locally as a proud member of the Gator Cats. Aside from his accomplishments professionally, Brian was proud to be “Uncle Bri” to the “Chosen Family’s” children and was always an extraordinary friend to those around him.

Friends may call at Jennings, Nulton & Mattle Funeral Home, 1704 Penfield Road, Penfield, Saturday (October 15th) from 1PM - 4PM.  Brian’s Funeral Service will be celebrated Sunday (October 16th) 11 AM in All Seasons Chapel at White Haven Memorial Park, 210 Marsh Road.  Interment will be private.  In lieu of flowers, we are asking anyone who wishes to memorialize Brian make a donation to a scholarship that has been established in his name at St. Bonaventure University.

To make a donation to the scholarship fund in memory of Brian, please type the following link:
https://netcommunity.sbu.edu/page.aspx?pid=945
When making a contribution, please click "Tribute Gift" and include "Brian Sidney-Smith" as well as including "hockey" in the "Comments".

Donations can also be made via Venmo: @bonasgiving with "Brian Sidney-Smith, hockey" in the notes.

Share Your Memory of
Brian
Upload Your Memory View All Memories
Be the first to upload a memory!
Share A Memory