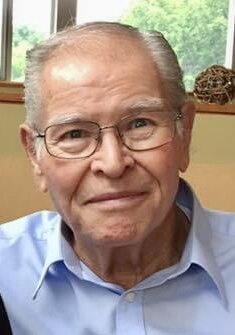 The family would like to thank the Nephrology and Neurology teams at Strong Memorial Hospital for their compassionate care given to Herb during his last days.

Herb graduated from Saint Francis Preparatory School in Queens, NY, and besides playing football, basketball, and baseball, he was an accomplished piano player in a band that played on Dick Clark’s American Bandstand. After high school, he spent six months studying to be a priest until he had a different calling and met his wife, Julie. He then served in the U. S. Army training at Fort Sill, OK. They loved to dance and go out on the town in New York City. Herb graduated from Fordham University and attended Dartmouth College. His banking career began in Harlem, NY with Chemical Bank where he worked closely with minority-owned businesses to help them obtain loans and get their businesses started. He was a former vice president and corporate loan officer for HSBC and Marine Midland Bank in Rochester, NY and was entrusted to manage the portfolios of Kodak, Xerox, Bausch & Lomb, and others retiring at age 62 to spend more time with his family. He was an honest, trustworthy, hard-working, and well-respected businessperson who also had a great sense of humor. He was a volunteer youth football coach and baseball umpire, never missed attending his children’s sporting events, and was known for being vocal with referees and umpires. Herb had great fun cruising to warm-weather climates with his wife and taking road trips to football games, especially to watch his beloved Buffalo Bills. He enjoyed the lake life at Keuka Lake for many years and loved to sit on his deck and battle the squirrels eating from his bird feeders…however, most of all, he loved his family deeply and they all loved him very much too.

Family and friends may call at Jennings, Nulton & Mattle Funeral Home, 1704 Penfield Road, Thursday, August 25, 4-7 PM. His Funeral Mass will be held Friday, 9 AM at Church of the Assumption, 20 East Ave, Fairport. Interment White Haven Memorial Park. In lieu of flowers, the family has asked to consider donating to the American Diabetes Association and/or American Heart Association in memory of Herb.

Share Your Memory of
Herb
Upload Your Memory View All Memories
Be the first to upload a memory!
Share A Memory