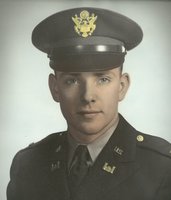 PITTSFORD – On May 14, 2020 Bob was called home to be with the Lord. Born Nov 8, 1932, in Hornell, his family later moved to Le Roy. He is survived by his wife of 64 years, Sarah; son Rick (Jennifer) of Springfield, VA, daughter Terry (Jon) Allen of Penfield; grandchildren Christopher (Lara), Michael (Lauren), Peter (Laura), and Elizabeth; great-grandchildren Ethan and Audrey, Olivia and James; brother John Flint of Le Roy, sister Joanne (David) Gluck of Ft Myers, FL. Bob graduated from Le Roy HS. He was an Eagle Scout. He made many lifelong friends while attending the SUNY College of Environmental Science and Forestry Ranger School in Wanakena, NY. He met Sarah while in flight school at Ft Rucker, AL. From there he took her and the family all around the USA and to Tripoli, Libya, as well as Italy. He attained the rank of full colonel in the US Army with 31 years’ service, including time with the U.S. Army Corps of Engineers. He had one tour in Korea and two in Viet Nam as a helicopter pilot. After his military career, he served as a military aide to two congressmen in Washington, DC, and then worked 14 years in quality control for The Lane Construction Co. He loved the Lord and enjoyed teaching Sunday school and singing in the choir. He was always eager to help others by lending a hand, literally, or simply offering a prayer and God’s blessings. He completed 22 consecutive Marine Corps Marathons (starting at age 50) and a few other foot races, including some with Terry and several grandchildren. A Service of Victory for Bob will be held Saturday, November 7, 2020 10AM at Faith Lutheran Church, 2576 Browncroft Blvd., Penfield. Due to COVID restrictions, those wishing to attend the service in person must RSVP to Carol at (585) 381-3970 in advance, and will be required to wear masks and socially distance. Those wishing may attend the service virtually at: https://livestream.com/flcpenfield/specialevents For those who would like, consider a memorial gift to the Alzheimer’s Association in Bob’s name. He will be interred at Arlington National Cemetery.