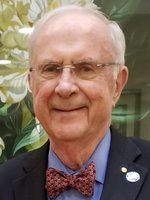 Donald Seymour Cameron of Pittsford passed away peacefully on March 28, 2020 at the age of 88 years. He lived a full and meaningful life, embracing each day with joy and love. Donald had an inquiring mind, was a voracious reader, and was an avid tennis player. He never told others how to live their lives - he showed them. He contributed in countless ways to the Rochester community and will be missed by many. Donald was born in Rochester on November 5, 1931, son of the late Gertrude and Thomas Cameron. He graduated from Marshall High School, and after beginning his undergraduate studies at RIT, was called to serve in the US Marine Corps during the Korean War. His career highlight as a CLU/ChFC was becoming the general agent in Rochester for one of the leading agencies of National Life of Vermont. In that role he was recognized with the Rachel May Swaim award. Throughout his life, he immersed himself in philanthropic activities which included serving as chair of the Rochester General Hospital Foundation, being an active member of the Rochester Rotary, and serving on many charitable boards. For his unstinting service to RGH, Donald received the Health Care Achievement Award for volunteerism. Donald is survived by his loving wife of 65 years, Helen Marie, daughter Anne (Robert) Swantz, son David (Sarah) Cameron, daughter Susan (Gregory) Kausch, sister-in-law Marilyn (Robert) Snow, family friend Mary Beth Cameron, and several nieces and nephews. His legacy will endure in his 8 grandchildren – Brian (Maria Nardecchia) Cameron, Jeffrey Kausch, Timothy Cameron, Katelyn (Ryan) Ford, Matthew (Megan) Cameron, Christopher Swantz, Sean Kausch, and Elizabeth Swantz. Donald's Memorial Mass will be celebrated Saturday August 22, 2020 1:00 at St. Joseph’s Roman Catholic Church of Penfield, 43 Gebhardt Road. Those wishing to participate in Donald's Funeral Mass online please go to: www.sjcpenfield.com/video. Donations in memory of Donald may be made to Rochester Regional Foundation or Rochester Rotary Charitable Trust.